SARAYA is recognized for the Wash A Million Hands! Project 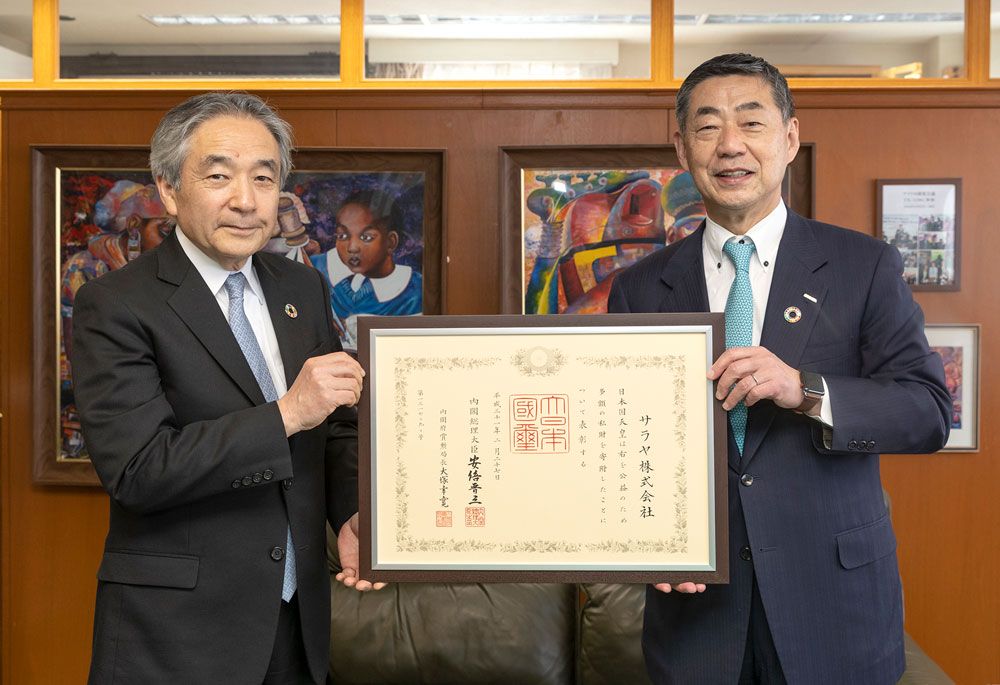 SARAYA receives recognition for its efforts in Hand Hygiene in collaboration with UNICEF Japan.

SARAYA is pleased to announce that the company has received a certificate of merit (the business equivalent to a medal of honor awarded to individuals） by the Japanese government for its contributions to the well-being of the public, for improving hand hygiene in Africa with the “Wash A Million Hands! Project”, made in collaboration with UNICEF Japan.

When did SARAYA start fighting for Hand Hygiene?

With the spread of infectious diseases such as dysentery in the early post-war years, Saraya was the first Japanese company, back in 1952, that developed an antibacterial soap solution with its own dispenser that sanitized at the same time that you washed your hands, and we haven’t stopped improving since then.

With the intention of spreading handwashing around the world, on the celebration of our 60th anniversary in 2010, we started the “Wash A Million Hand! Project”, spreading hand washing using soap in Africa and the Republic of Uganda together with UNICEF Japan. 1%1* of all sales of several SARAYA products (Arau being the main brand involved) were donated to UNICEF, an activity we still continue.

On the 18th of April, we received the certificate of merit from Mr. Hayami, the Director of UNICEF Japan, on behalf of the Japanese Government. This is an extra push to continue our partnership with UNICEF Japan, NGOs, local governments, civil society organizations, and other key role players to contribute to the improvement of sanitation in the Republic of Uganda.

Uganda’s under-five mortality rate is said to be 55 per 1000 children, a major disease that can be prevented by proper handwashing. In order to reduce it, a goal initially set as one of the Millennium Development Goals (MDGs), we were able to increase the handwashing penetration rate from 14% in 2007 to 32.7% in 2014. In 2015, these goals gave way to the 17 Sustainable Development Goals (SDGs), specifically for this project, numbers 3 “Good Health and Well-being” and 6 “Clean Water and Sanitation”, something that only leads to more validation to our efforts.

A continuation of work in reducing newborn and under-five mortality rate is still vital. Despite efforts in incorporating appropriate hand washing and equal access to sanitation facilities, soap penetration rate in 2018 has only increased to 36.5%2*. Things have indeed improved, but we will continue working on this project for the future of Uganda’s and Africa’s youth.